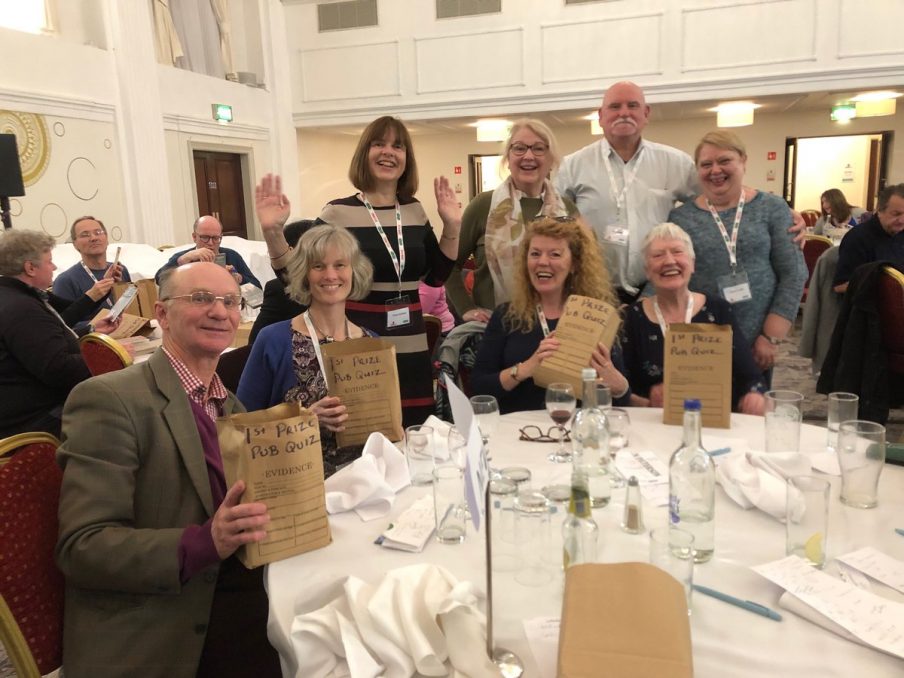 Here’s 2019 – my year in writing, TV, bloggers and authors. In other words: I did a lot of writing, watched some telly, enjoyed the support of wonderful book bloggers and discovered new authors. My 2019 New Year’s resolution was to network more with other readers and writers. This is how I got on in 2019 – My Year in Writing.

I asked the Facebook group Book Connectors to recommend upcoming literary events. One suggestion came from blogger Jo Park to attend a talk at Waterstones Cheltenham by author Diane Setterfield. So glad I went as Once Upon a River became one of my favourite reads of the year.

The second half of The Good Teacher blog tour took place. Kind, flexible and efficient bloggers stepped in when the publication date was changed at short notice. Read more about the bloggers who supported the tour here, here and here.

When not putting the final touches to a new manuscript, I spent time this month improving my online presence with advice from career and business coach Louise Jenner.

Sent the completed manuscript of the first in a proposed police procedural series to my agent, Marilia Savvides, and began work on something new, a teen crime novel.

Spent time on social media, getting to know some of my fellow Killer Reads authors. They’ve been a brilliant source of support and humour. Over the year, I read their latest books, all terrific reads:

Chris Curran – All the Little Lies – a thriller set against a backdrop of the art world, with a stylish and dramatic climax.

June Taylor – Keep Your Friends Close – terrific plot, this one caught me out good and proper … Can’t say more; you’ll have to read it.

Ali Harper – The Runaway – takes the traditional private eye genre, gives it a feministic kicking and lobs the No Stone Unturned missing persons agency onto the mean streets of Leeds.

Mary-Jane Riley – Gone in the Night – fast-paced mystery featuring journalist Alex Devlin. The Norfolk/Suffolk setting in winter is so well depicted, you can feel the east wind blowing off every page.

My editor, Finn Cotton, sent me a printed proof of The Roommates for final amendments. How different my words looked in book format. I made loads of changes!

Began posting more reviews on BookBub. Please follow me on BookBub to see my reading recommendations and hear about my book promotions and forthcoming releases.

Continued writing the first draft of my teen crime book. Took a break to watch The Victim on BBC One. A grieving mother is in court, charged with identifying online and, therefore, endangering a man she believes was convicted of murdering her child. But is he a notorious child killer or a victim of mistaken identity? This was an emotional watch about a tragic moral dilemma and an acting tour de force by James Harkness and Kelly Macdonald.

This month saw me follow up two more Book Connectors’ suggestions. I attended CrimeFest in Bristol. (See my review here.) Highlights included winning the crime fiction quiz with Loarn Paterson, Fiona Erskine, Linda Duncan McLaughlin, Una, Ann, Bill and my husband Nigel; and meeting authors Kate Rhodes, Sarah Flint, Kate Simants , James Delargy and blogger Karen Cole. As an introvert by nature, I expected to spend the evenings hiding in my hotel room so I am forever grateful to the friendly and welcoming Chris Curran and Anja De Jager for taking me under their wings. Thanks to their support, I ended up rather enjoying myself and am going back for 2020, this time to speak on a panel.

Lots of editing of my first draft this month, with time out to watch the marvellous Summer of Rockets. Set in Britain in 1958, this is the story of Samuel Petrukhin, a Russian-born Jewish inventor and businessman who runs a successful factory that manufactures hearing aids. Despite his efforts to fit into British high society, he and his family face xenophobia and suspicion. That is until some very important people see the espionage value in the hearing aid and suddenly the Petrukhins get invited to all the best parties. But who can Samuel trust? Featuring an all-star ensemble cast with a stellar performance by Toby Stephens as Samuel, this sumptuous six-parter was tucked away in a mid-week slot on BBC 2.

A short break in rural Shropshire led me to re-read Precious Bane by the famous Shropshire author, Mary Webb. Then I read her other classic, Gone to Earth, and followed it up with a modern take on the rugged Shropshire landscape in The Devil’s Chair by crime writer Priscilla Masters.

Suitably inspired, I ended the month by plotting out a dual timeline psychological thriller set in Shropshire. I hope to write it next year.

Sent the completed manuscript of my teen crime novel to my agent and began researching a major new project that is likely to take me at least two years to complete. 2019 – My Year in Writing; 2020 – My Year in Even More Writing.

Contacted several bloggers to ask whether they would be able to review The Roommates and take part in a blog tour in October. Later, the new HarperCollins press officer, Jen Harlow, came aboard and contacted more bloggers on my behalf. 2019 – My Year in Writing, and My Year in Wonderful Book Bloggers.

The cover reveal for The Roommates got the seal of approval from my daughter, the arbiter of all things cool in the Sargeant household. I was grateful to the bloggers who took part on social media.

A fourth suggestion from Book Connectors took me to Lancaster for the Morecambe and Vice Crime Writing Festival. This was another delightful, well-organised event. (See my full review here.) I had a nice chat with Anne Coates who ably moderated a panel on children’s crime fiction. Not only did I watch several panels, I took part as a speaker and shared the panel with Margaret Kirk, Alison Belsham and Robert Scragg. Special thanks go to a writer called Ann who became the first person ever to ask me to sign a book.

The Capture on BBC One became a TV phenomenon in our house. This was a twisty conspiracy theory story featuring dodgy goings on with CCTV. Loved the whole series, especially the satisfying ending.

Ebook publication for my new psychological thriller, The Roommates, set on a fictional university campus during freshers’ week. Many hard-working bloggers took the time to write reviews and support my blog tour. (Read more here.)

Travelled to my home county of Lincolnshire to be interviewed about my writing by BBC Radio Humberside in their Grimsby studio. Also received a warm welcome from my former sixth form college when I gave talks and workshops.

The paperback of The Roommates was launched. Popped into Asda and Sainsbury to see real-life copies on the shelves. My husband worked flat out to contact local magazines and university newspapers to offer interviews and review copies.

Fantastic telly this month was provided by Guilt on BBC Two. A Tell-Tale Heart meets Tartan Noir. A black comedy about two brothers who try to conceal a crime but every lie digs a bigger hole.

Went to the HarperCollins Christmas Party held in a room above The Ivy restaurant. Had lovely chats with the editing and publicity teams and was delighted to see Chris Curran again (and her new alter ego Abbie Frost.) I also met author Abigail Dean and her editor Phoebe Morgan.

Absolutely thrilled when book blogger Nicki Richards named The Roommates as one of her books of the year.

My husband’s publicity drive paid off, with lovely pieces in various media outlets, including:

An interview on BBC Radio Gloucestershire with lovely presenter Nicky Price who devoted 20 minutes to discussing The Roommates. I was thrilled when she contacted me on Twitter a few days later to say she’d finished the book and really enjoyed it.

University of East Anglia – interview in Concrete Newspaper and a lovely review.

Lincolnshire Life magazine will publish their review in January 2020:
“Sargeant is certainly aware of the fibs that new university acquaintances are liable to tell, and the search for new identities that interest and action groups on campus encourage – and so the narrative of disappearance, deception and new beginnings that drives The Roommates works well within the atmosphere of a new university term that Sargeant creates….The unanswered questions will keep readers engaged to the end but Sargeant also shows her skill as a writer in portraying the inner conflicts and lasting pain that upsetting incidents within families can bring about….This gives The Roommates an underlying poignancy that may resonate with a wider circle of readers, not just existing fans of the genre.”

Jen Harlow, the HarperCollins press officer, secured a review in Closer Magazine. I was thrilled to find The Roommates sandwiched between Jason Statham’s new DVD and Daniel Craig’s new film. “Must Read….Gripping. We loved this book, which is full of twists and turns”

For me, Sticks and Stones on ITV blew all other TV shows out of the water. About office bullying, it was the most uncomfortable, relatable and authentic drama I’ve ever seen. Ken Nwosu deserves a best actor award for capturing the tragic decline of the victim in his nuanced facial expressions and deteriorating posture. He even held his briefcase differently as the bullying progressed.