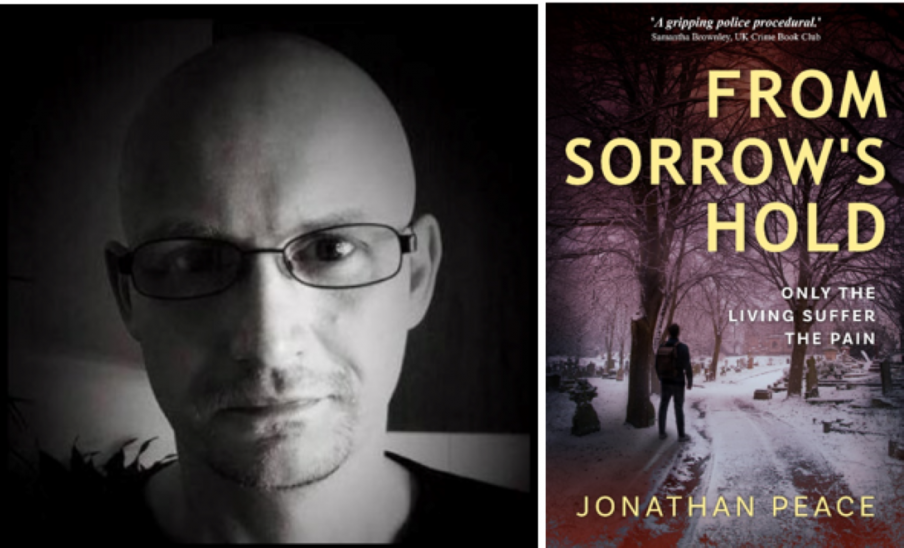 Here’s the second of three posts by guest authors this month. Jonathan Peace’s Road to Publication led him to the successful independent publishers, Hobeck Books. His second novel with them is coming out on 12th July.

There have been three touchstones that have accompanied me throughout my life: my love for Star Wars, my passion for tabletop gaming and my insatiable need to write stories. I wrote for fun as a kid, weird stories about my Star Wars heroes or fantasy tales of swords and goblins, magic and monsters. As my love for cinema grew, I started to read film scripts, and then started to write them.

I also read. I read a lot and I read wide: from Stephen King to Terry Pratchett; Tom Clancy to John Irving. Whatever I was reading at the time influenced the writing project. My short stories became littered with supernatural moments when I read King; when I was reading Irving my prose was littered with semi-colons and long, run-on sentences.

My first real serious stab at writing a novel came in 2000 following a very stressful, messy divorce. I vented all my anger and frustration into 500 pages of a story that jumped from drama to horror via the supernatural. It was a structural mess, mainly because it was drawing heavily from very personal experiences. As bad as it was, the main thing was it was finished. It only got read by one person who gave me some good advice: “You can obviously write; you just need to find the right thing to write about.”

That was said in 2003 and I didn’t find the right thing to write about until 2019. In between I wrote a bad Mills and Boon book called BlackJack (flatly rejected); I wrote three more novels (two horror and one thriller) and a dozen screenplays. For a time I focused on launching a screenwriting career after reading Joe Eszterhas’ book The Devil’s Guide To Hollywood: the screenwriter as God! I studied the craft, put a writing process in place and found a little success thanks to a commission for a scifi horror short with Vantis Pictures (The Rift 2012). Next came an option for my horror-comedy BubbleButt with Causeway Pictures after spending a year with a development executive at Focus Features. It came very close to a greenlight but the fickle nature of the film industry hit and the project died in development hell. The same screenplay however placed in the quarter finals of Stage 32’s 2020 screenplay competition.

I was able to combine my love of tabletop gaming and writing together by developing and writing the background for Gangfight Games’ western horror skirmish game, Blackwater Gulch, as well as their arena-combat sci-fi game Mechadrome. When Mantic Games took their fantasy mass battle game to Kickstarter, I wrote a tie-in novel that was given to backers. It was, however, severely edited down from the 110K word manuscript I handed in, and I now have the rights back to the story which is waiting for me to rewrite it within my own IP. When I worked for Battlefront Miniatures, I wrote several WWII short stories that were included in their rulebooks.

Now we come to 2019 when I took a chance on studying Creative Writing at University for a BA (Hons) degree. During this time I took a stalled horror novel, and changed it into a crime novel set in my hometown of Ossett in 1987. It got attention from publishers and agents and I first signed a three-book deal with a Canadian publisher that quickly became a nightmare. We just weren’t compatible and had very different beliefs about how the book should be released and marketed so we went our separate ways. The next publisher I signed with was another relatively new company, full of passion for the genre but again it was not meant to be as events conspired against us both. We parted on good terms and I was back in the querying trenches once more.

And that is how I came to find Hobeck Books. I sent my manuscript in, along with a brief explanation of my publishing nightmare to date and I was lucky enough that they loved the book and wanted to publish it, as well as the next two in the series I had planned.

Working with Adrian and Rebecca is a dream; they have gathered a fantastic team of editors, cover designers and ARC readers that the process, so far, has been an utter joy and I have learned so much from them all as Dirty Little Secret and From Sorrow’s Hold were brought to readers.

You can keep up to date with all my writing shenanigans by following my social links.

About From Sorrow’s Hold

What should be a time of excitement and joy is forever tainted when a teenager’s body is found in the graveyard of Ossett’s Holy Trinity Church.

As they respond to the devastating event, WDC’s Louise Miller and Elizabeth Hines, together with psychologist Karla Hayes each use their own experiences of suicide to help the wider community as it struggles to understand the terrible choice that was made.

I’ve read Jonathan’s first Louise Miller novel, Dirty Little Secret, and I’ve had a sneak peek at From Sorrow’s Hold. Well worth a read if you enjoy gritty police procedurals set in the largely technology-free 1980s.

I hope you enjoyed Jonathan Peace’s Road to Publication story. Here are links to previous authors who have written their Publication Journey stories for the blog: