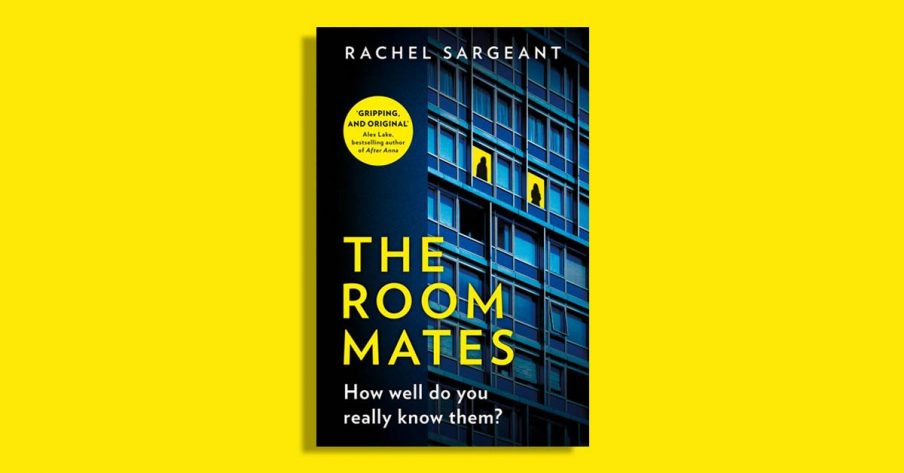 Welcome to The Roommates by Rachel Sargeant Chapter Extract. This is a sneak preview of my new psychological thriller set on a university campus during freshers’ week.

“You should have gone to a Russell Group university.” Imo’s mother makes her pronouncement after ten minutes of stop-start traffic inside the campus. She’s got her brave face on, pretending to be forthright and normal.

Imo shrinks into the back seat and casts an anxious glance outside, but there’s no change in the faces of the students walking past. They haven’t heard the insult despite the open car windows. Wide-eyed and chatting, they stream on, like Glasto, but without the mud and wellies. It’s been warm all month. Imo was sunbathing in the garden yesterday, trying to suppress her gut-wrenching nervousness about today. So much is riding on it. Her chance to escape the life of grief and guilt that she and her family haunt.

What does her mother mean anyway? What difference does a university league table make to the traffic jam? Has she forgotten the free-for-all to get into Freddie’s uni four years ago? But Imo remembers her mother wasn’t there. Dad and Imo took Freddie. That same day Mum drove Sophia to Nottingham. Imo holds back a sigh; they were ordinary then.

A girl in a bright pink T-shirt steps up to her father’s window. “Welcome to the Abbey.” She hands him a hessian bag with Abbey Student Union printed on the side in the same pink as the T-shirt.

Imo’s belly flutters. It’s happening. She’s become part of the exclusive club of students who call it the Abbey despite it saying University of Abbeythorpe on the website. She leans forward, snatches the bag from her dad and looks inside. Leaflets on The Abbi Bar and Takeaway, the Student Welfare Service, and Avoiding STDs; a freshers’ wristband and a packet of condoms. She quickly clutches the bag on her lap. If her dad had seen inside, he’d have turned the car around, despite being in one-way traffic. And Imo would have understood. Risk weighs differently in this family.

The car park is behind a line of bushes on the right side of the road. They park and debate whether to take the luggage with them. Freddie advises leaving it until they know where Imo’s room is. Imo backs his suggestion; anything to avoid her old Groovy Chick duvet being paraded through reception. Her mum made her bring it, saying that uni tumble driers might damage her new one of the New York skyline. Imo didn’t want that one either. It was a birthday present and she intends to leave everything about that day behind. She’ll never be able to look back on turning eighteen with anything but ache and horror.

A large vehicle chugs into the car park. A boy in a high-vis jacket walks ahead and marshals it lengthways across four parking spaces. It’s an ancient ice-cream van painted sky blue, Cloud’s Coffee in bold purple lettering above the serving hatch. A thickset woman, with hair the same shade of blue as the van, climbs out the driver’s side. She pulls her seat forward and a girl jumps down. Taller and slimmer than the mother, and tidier too; her hair is short and blonde.

“Take this, Phoenix.” A man in the passenger seat passes her a holdall. Imo can see where she gets her looks from. Father and daughter are blessed with cheekbones. Not many people could carry off a name like Phoenix, but this girl can. She exudes athletic star quality.

Imo’s family follows the stream of people towards the main accommodation reception. Sweat seeps into her hoodie but she can’t take it off despite the late summer heat. Even though she got it at the British Heart Foundation shop, it’s a Jack Wills. And first impressions count. She spent two hours on Thursday planning her arrival outfit. Like her mother, she can play at normal.

They pass other students and their parents coming out of the building, clutching white envelopes, presumably containing the keys to their home for the next ten months. On the open day last year, Imo walked into this wood-panelled foyer, giggling with other Year Twelves on a trip from her school. Was that the last time she laughed and meant it? Not the fake chuckle she gives these days when her family play real-life charades. She swallows hard.

The hall echoes with the chatter of dozens of families. More students in pink T-shirts usher them into three lines. Imo’s family stand in the left-hand queue. Imo shifts from foot to foot, unable to stop her legs from wobbling. Wishing her parents weren’t with her. Hoping nobody will recognize them.
She swivels her head to look at the white-washed pillars behind the long reception counter. They’re adorned with posters advertising the Freshers’ Welcome Party.

The line moves swiftly and soon Imo is in possession of her envelope, with instructions to turn right out of the building, enter the annexe at the back and take the stairs to the first floor. Scared of heights since Inspector Hare’s visit shook her family rigid – since she saw the broken body and imagined the fall – she’d asked for a ground-floor room when she filled in the accommodation form. At least they haven’t put her at the top of a tower block. It’s been months since she climbed higher than the second storey in any building, even though it’s an irrational fear. Inspector Hare had got it wrong again.

On the steps outside, right in the way of other families coming in and out, her parents stop for another debate about fetching the luggage. A Mini Convertible sweeps into the crisscross box of the no-parking zone in front of them. A high-heeled black sandal steps out of the driver’s side. The sandal strap coils along a slender ankle. When the driver stands up, the strap disappears under the hem of black palazzo trousers. The young woman shakes her head and thick, dark curls cascade over her bare shoulders. She’s wearing a white broderie anglaise blouse. A gypsy top, Imo’s grandma would call it, but there’s nothing rustic about its wearer.

“Mid-blue,” Imo’s dad says. “That’s the colour I’d go for too if I ever got one.”
Imo and her mother share a smile. Only her dad could see a beautiful woman and show more interest in her car.

A sudden prickling feeling tells Imo that she is being watched. It’s a familiar sense, one she has struggled with regularly over the past few months. Freddie has too – even worse for him. She swallows down a knot of fear and forces herself to look at the crowd. Students and parents rush past in the heat, not looking her way. She tells herself that it’s just her imagination. That nobody’s recognized her.

Then she freezes. A tall, hooded man is standing in shadow under a tree on the opposite side of the street and smoking a cigarette. Dressed all in black, too old to be a student but clearly not a parent. But it’s not Imo he’s staring at; he’s watching the beautiful woman’s every move. His eyes follow her as she turns to lock her car. A shiver runs down Imo’s spine.

When the man sees Imo looking, she drops her gaze to her envelope, hands trembling. Wariness of strangers is another product of the last few months, and this one looks like a stalker.

The young woman puts her keys in her handbag and walks past Imo into the reception, leaving a waft of expensive perfume in the air. When Imo looks back across the street, the man isn’t there.

About The Roommates
Do you really know the people you live with?
THEY LIVE IN YOUR HOUSE
University is supposed to be the best time of your life. But Imo’s first week is quickly going from bad to worse.
YOU SHARE EVERYTHING
A stalker is watching her flat, following her every move, and Imo suspects that her new roommates are hiding dark secrets…
BUT DO YOU TRUST THEM?
When one of them suddenly disappears, the trauma of Imo’s recent past comes hurtling back to haunt her. And she begins to realise just how little she knows about the people she lives with…

Purchase details
The ebook comes out on 24th October.

Also available in other formats.

The paperback is published on 28th November and will be available from bookshops.

I hope you enjoyed The Roommates by Rachel Sargeant Chapter Extract.

Details about my other books are available here.