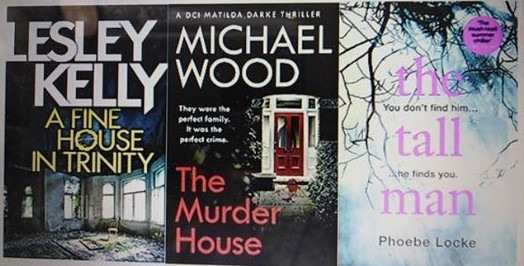 My Book Reviews for February

Here are my book reviews for February. This month I’ve read and loved an excellent mid-series police procedural, a rollicking Scottish crime caper and a stunning literary thriller. The good thing about bad weather is it’s the perfect excuse to curl up with a book.

The Murder House by Michael Wood

This is a well-paced police procedural that gets off to a heart-pounding start. The opening crime scene – a married couple and their son slaughtered in their home after their daughter’s wedding reception – is not for the squeamish, but it sets up an intriguing puzzle that continues throughout the novel: who had sufficient grievance against all three family members to unleash such violence against them?

I had an inkling early on. (I have a devious mind and worry about myself sometimes.) But far from disappointing me, this made me keep on reading into the night and reach the end at 1.30am with a satisfied grin on my face. This well-told mystery was worth the lack of sleep.

Author Michael Wood skilfully manages a large cast of detectives and gives us glimpses into their private lives. I had a chuckle when my former editor’s namesake popped up as a temporary detective constable in South Yorkshire Police. So that’s where he went.

This is a series that’s hit its stride and has the thread of an unsolved case binding each book to the next. The epilogue of The Murder House suggests that this case may come to the fore in a future story. There were also hints of a serial killer starting an, as yet, unnoticed campaign of terror. I’m looking forward to book six already.

A Fine House in Trinity by Lesley Kelly

Anyone who reads my reviews will know I’m a fan of Lesley Kelly’s Health of Strangers series. (See my review of the first book here.) This month I read her debut novel, a standalone caper that rampages through Edinburgh and its environs.

Joe Staines is down on his luck. But are things about to change for the better when he inherits a house in Trinity from his friend Lachlan Stoddart, who has committed suicide? Well …no. Stainsie’s bad luck started the day he befriended Lachlan as a wee laddie in primary school. In the absence of a queue of other school kids wanting to be his pal, Stainsie made do with Lachie and enjoyed the benefits of a friend with a swanky home, cinema-sized TV and the latest video games. But Lachie’s dad, Guthrie Stoddart, was head of a money-lending empire with a strict, thug-enforced debt collection policy.
The only person more ruthless than Guthrie Stoddart was his wife, Isa, who took over the family business when Guthrie disappeared.

Since school days, Stainsie has tried to distance himself from the Stoddarts, but fate keeps bouncing him back into their orbit. Now Isa has been murdered, possibly by Stainsie’s on-off girlfriend Marianne, and the house in Trinity, inherited from Lachie, has a skeleton in the closet (literally).
Stainsie’s only hope of cutting free of the family for good is to solve the mysteries of all three Stoddart-related deaths. But that means staying ahead of Isa Stoddart’s vengeful henchmen.

This is a rollicking read with dark and deadpan Scottish humour reminiscent of Stuart MacBride. Hapless Stainsie had me turning the pages with a grin on my face.

The Tall Man by Phoebe Locke

This was the thriller I’ve been waiting for. I’m only sorry it didn’t cross my path when it came out in 2018. I’ve been deprived of 2 years of knowing it, of getting into the heads of Sadie, Amber and Greta, and of tingling within their memories, fantasies and fears of the Tall Man (urban myth or fatal reality?).

Greta is the put-upon production assistant working on a fly-on-the-wall documentary about Amber, a teenage internet sensation and acquitted murderess. The rest of the film crew warn her not to be taken in by Amber’s apparent youthful innocence. But given the bizarre behaviour of Amber’s mother, Sadie, haunted since childhood by the Tall Man, doesn’t Amber deserve their sympathy?

As the novel progresses we learn more about Sadie’s constant terror and her awkward relationship with Amber. In a gradual build-up that ends in a spine-tingling climax, we learn of the events of two years earlier that led to Amber’s arrest.

Flashbacks, viewpoints, timelines, emails and diary extracts abound, but Phoebe Locke is expert at handling a complex plot and keeping up the tension. The writing manages to be spikily unsettling and, at the same time, smoothly readable. This is an author who knows her craft.

So that’s all my book reviews for February. To see my reviews for January, including my short review of Phoebe Locke’s second novel, The July Girls, click here.

I’m delighted that The Roommates continues to receive some wonderful press interest, especially from university newspapers. Here are The Roommates book reviews for February and an interview with me:

Manchester Metropolitan University: “a shocking but insightful story…A fun read for sure!”

Durham University: “Grippingly original, The Roommates propels you through its pages, permeated with suspense and the unsettling shadows of human nature.”

Swansea University: “… the novel seems to be reading itself, almost as if you are the sixth flatmate trying to save your friend… you can find nostalgic glimpses of freshers with an added mystery” (page 24/25)