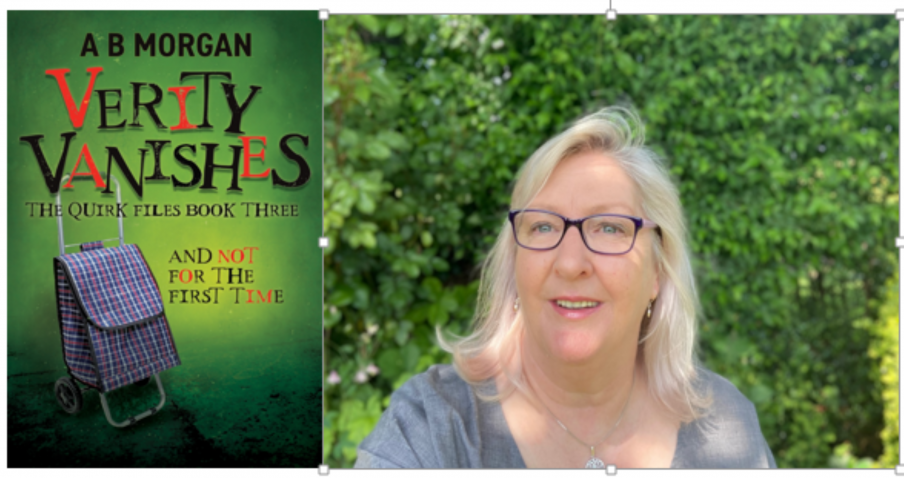 How I got published by A B Morgan

How I got published by A B Morgan

Welcome to ‘How I got published by A B Morgan’, another in the occasional series of guest posts by authors who reveal their journey to publication. I bought and read A B Morgan’s new title Verity Vanishes last week. It went very well with my coffee breaks in the garden. If you loved Richard Osman’s The Thursday Murder Club, the Quirks series is a must. Verity Vanishes is the third book to feature private investigator Peddyr Quirk and his wife Connie.

Now over to A B Morgan:

Before I begin, I’m almost compelled to add a subtitle which reads ‘…and how not to go about it.’ Cards on the table: I never yearned to be a writer, let alone a novelist.

There, I’ve confessed, and I feel no better for it, so perhaps I should reveal a little more regarding my lack of writing credentials.

After 30 years in the NHS as a registered mental health nurse, I hit burnout and the menopause all at the same time. The resultant crash was catastrophic in terms of my career. At the time I was a Clinical Nurse Manager for a countywide specialist service, an advanced practitioner and a nurse prescriber. A significant electrical fault had developed in my heart, and eventually I was resigned to ‘sickness absence’ while parked on an NHS waiting list for over eight months (ironic, isn’t it?). What to do to preserve my own sanity?

What I should have done was to be useful and write a set of clinical guidelines for student nurses on the assessment of first episode of psychosis. I thought about it for roughly an hour and dismissed the idea. What I needed was a new challenge for my brain, something creative that didn’t involve physical activity.

Did I seek out and sign up to a creative writing course? No. Did I have years of writing experience as a journalist? No. Did I belong to a book club or a writers’ group? No, not back then. Did I seek help and advice? Well, you get the picture. Muggins here ploughed straight in.

‘I’ll write a crime novel. I love crime fiction. How many words do I need to write?’ I used dear old Google to tell me I required at least 60,000 words. A few years previously I had scraped together 30,000 words for an MSc dissertation, so my response was classic. ’Fair enough. That’s two dissertations’ worth. I can do that.’ Idiot.

After years working on the front line of mental health services, I had stories to tell but no idea how to structure a novel other than it needed a beginning, a middle, and an end, and in my case a crime had to be committed. Could I bump someone off? This was difficult for me as a nurse, it went against the grain. However, a comeuppance was very tempting as a plan, and I gave this due consideration. Inspired by some research I’d read about, which was carried out back in the 1970’s and a bonkers idea about Jesus being detained under a section of the Mental Health Act, I set about writing a book – Not a piece of dynamic flash fiction, or poetry, not even a short story…no, a book, a whole book and nothing but a book would suffice. A challenge is a challenge, there’s no point in it being easy. And my goodness, it was far from easy to write a book from scratch.

To my credit, I had a good premise; For reasons that become clear as the story progresses (no spoilers), ‘Mark Randall’ ensures he is admitted to an acute psychiatric unit. Once there, and under legal detention, he is at the mercy of a consultant psychiatrist. This particular doctor uses his power and control with little or no compassion, he’s a man with overt narcissistic tendencies. For Mark, gaining his freedom again, in one piece, becomes far more treacherous than imagined.

I was off to a good start with this idea of mine… or so I thought. When I sent the resultant manuscript to an editor for a full and frank critique – which I have to say was one of the few sensible things I did – I was feeling confident that I had ‘something’. Apparently, according to the feedback from her, my creation had potential and was refreshingly quirky but in poor shape. Sadly, the dialogue was wooden, my grammar was appalling, and overall, the manuscript was muddled.

Therefore, I was left with two stark choices; I could throw it in the bin or improve on it. I chose the latter.

‘Well? Shall I take it a step further?’ I asked myself once satisfied with the updated version.

Challenge number two: Could I find a publisher for this book? ‘How the hell do you go about finding one of those?’ I wondered.

I believe it’s called the scatter-gun approach; I sent submissions off everywhere. Having said that, I’m not daft enough to be slapdash about making submissions to agents or publishers, but I was impatient, and therefore determined to find publishers open to submissions without the need for the elusive agent. Bearing in mind that I knew nothing about vanity publishing, let alone the differences between traditional publishers and independent presses, I felt very lost in an unfamiliar world. What I did find out though was that literary agents rarely responded and large publishers would only accept submissions through agents. The doors to the big publishing houses appeared closed.

After a few delightful rejections, mostly polite, I received an email offering me the chance of a contract with the recently formed Bloodhound Books.

Ta-Dah! Cracked it. ‘A Justifiable Madness’ was published in September 2017.

After that I couldn’t stop, the stories kept coming and, cutting a longer story short, during 2020 I found a welcoming home at Hobeck Books, publishers of The Quirk Files mystery series. And now, unbelievably, my ninth crime novel is out in the world. ‘Verity Vanishes’ is book 3 in the series and I’ve narrated the audiobook versions for all of them.

So, the moral of the story is… publication is possible if you have good stories to tell, work hard, apply yourself, find your ‘voice’ and remain determined.

The Quirks are back, and there is another crime to solve for P.Q. Investigations.

When Verity Hudson goes missing, Peddyr Quirk – with assistance from his effervescent wife Connie – investigates a strange new case which unfolds in an unsavoury part of town. It soon becomes apparent that they are not the only ones looking for Verity.

A freelance researcher is searching for her birth mother.

An influential man of power and money is desperate to find his estranged sister.

A local politician is determined to expose a hidden tragedy.

A TV journalist will stop at nothing to expose the true story … if it can be uncovered.

British author Alison Morgan is a retired mental health nurse who first ventured into the world of the crime writer in 2017 when her acclaimed debut novel ‘A Justifiable Madness’ was published, followed by three more psychological suspense titles.

Writing under the name A B Morgan, Alison is a professional member of the Crime Writers’ Association, and proud to be among the growing stable of award-winning authors at publishers Hobeck Books.

It is said that Alison writes with quirky wit and yet delivers on suspense and intrigue without alienating the squeamish reader. Her contemporary mystery series, The Quirk Files began life with ‘Over Her Dead Body’ – published in 2021 – which introduced the world to the delightful husband-and-wife team of private investigators, Peddyr and Connie Quirk. The popular Quirks have now spawned a prequel novella and three novels to date with a fourth book on its way.

Happy to share her experiences of becoming a crime writer, in and around Bedfordshire where she lives, Alison gives lively entertaining talks and presentations on the subject, always with a certain humour and bags of enthusiasm.

With her narrating and audio editing skills polished through much practise, Alison can now add audiobook narrator to her CV.

The Quirk Files can be found at www.hobeck.net as can some lovely crime fiction freebies for subscribers.

Books by A B Morgan are available on Amazon and elsewhere.

Audiobook versions can be found as follows:

‘Over Her Dead Body’ Kobo https://bit.ly/3kocW1F

I hope you enjoyed How I got published by A B Morgan. Here are links to previous authors who have written their Publication Journey stories for the blog: