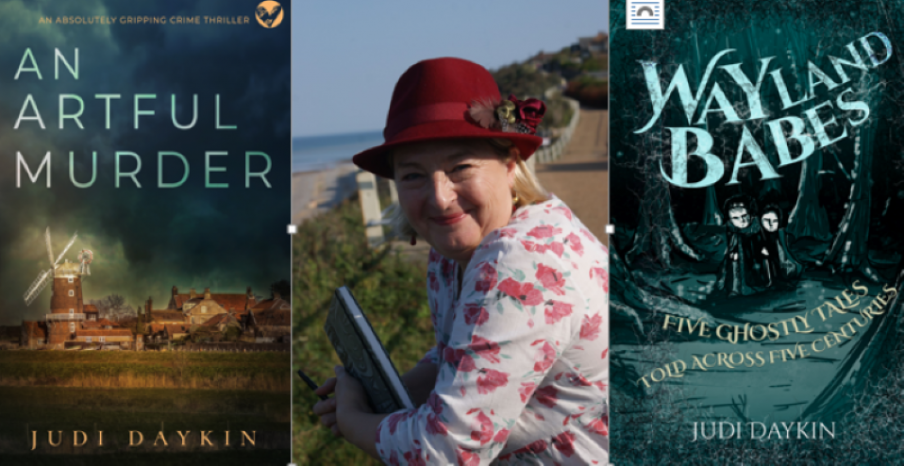 The Road to Publication by Judi Daykin

The Road to Publication by Judi Daykin

This month I will be featuring three road to publication stories. The first one is by Judi Daykin, who is published by two successful independent publishers, Joffe Books and Hobeck Books. As I’m going through a phase of reading folklore horror at the moment – courteousy of Andrew Michael Hurley and Alison Littlewood – I’ve snapped up a copy of Judi’s ghostly short story collection, Wayland Babes. I also look forward to reading her forthcoming crime novel, An Artful Murder.

Over to Judi to explain her road to publication:

I’ve been a late starter at most things in my life. I finished my degree at thirty-six with the Open University. I went to drama school at forty and have been a working actor ever since. I had also long dreamed of doing the MA in Creative Writing at the University of East Anglia, not least because it is my local university and for the well-known reputation of many of its graduates. When the school announced a new specialisation in Crime Fiction for the MA, I knew the time had come in my late fifties.

The course was part-time over two years. Much of it was conducted online, with just two days attendance per term, and was offered a place starting in 2017. We were taught by academics who were also published authors and were lucky enough to have masterclasses with some of the best writers in the genre. To complete the course, we had to submit the full-length novel we had been working on over the previous two years. Of course, most of us were still writing when the course finished and I, for one, spent most of the summer frantically rewriting my manuscript. To my genuine surprise, I was one of three students shortlisted for the Little Brown student writers prize that September. Then there was an agonising three-month wait while two tutors read and commented on our submissions before giving our final results. I had passed!

I had been approaching agents without success, and after using the tutor’s comments to revise the story, I began to contact indie publishers directly. I was surprised by the enthusiastic response from Joffe Books, who quickly welcomed me onboard. Under Violent Skies was released in September 2020, just a year after I had completed my course. It was longlisted for the CWA John Creasey (New Blood) Dagger in 2021. There are now three books in the DS Sara Hirst series, with a fourth due on the 13th of July – An Artful Murder. All are set in the area of Norfolk where I live, as my heroine and her team investigate the sometimes gritty and violent underbelly of rural crime.

Although I was born and raised in West Yorkshire, I have lived in Norfolk since 1981, and I love the place. For some years, I have been tinkering with a series of ghost stories set here, and during the dark days of that first Christmas lockdown, I rounded them up and put them into a novella. Having been successful with one indie publisher, I got to know another, Hobeck Books. Two of my colleagues from the course are with them, and I have read two audiobooks for them as an actor. I was thrilled when they took on the challenge of publishing my ghostly Wayland Babes.

I am so grateful to the UEA for welcoming me in and to both my publishers for taking a chance on me. I write full-time these days and more stories are in the pipeline.

Detective Sergeant Sara Hirst has dealt with murder before, but nothing so bizarre as this. A dead body forced inside the top of a funerary urn — on the lawn of a remote country manor — with a toy llama carefully balanced on its head. A few days later, the body of a woman is found, tied to a gothic-style chair with her throat slashed. There’s a llama with her too. The two victims were part of the ‘Famous Four’, a group of friends who studied at the University of East Anglia back in the day. Three of them still work there. And now two are dead.

Sara worries she’s overlooking something obvious. And she has a growing suspicion that her boyfriend is keeping something from her. Sara must keep focused if she’s to unmask the killer before they strike again.

The Wayland Woods in Norfolk – an ancient place where sound and silence, truth and myth, and life and death intertwine. Some say that the babes of the woods still walk the Earth – wandering through the trees, forever lost, holding hands and searching for help. To see them is a terrible omen. As daylight falls, you may hear the wailing – is it the babes, or just the wind in the trees? What could it mean to see the babes, feel their presence, and be lured deeper into the woods? They look so real. They seem so helpless and desperate.

Five tales tell of five lives touched over five centuries by the so-called babes in the wood. If they beckon, will you follow?

I hope you enjoyed My Road to Publication by Judi Daykin. Here are links to previous authors who have written their Publication Journey stories for the blog: